Beautiful picture… We know pretty well what are you talking about as you can see from the few of our place we added on the reblogging. Snow seasons are back in Italy and allover the world: maybe General Winter didin’t heard about Al Gore’s rants.

We’re getting ready for the new white coming and our horses and friends too. Come visit us! 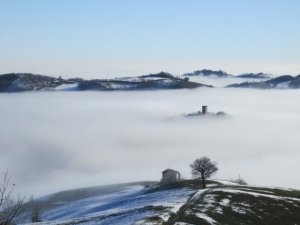 Early one cold winter morning, five cowboys saddled up and rode out into the snow covered fields of the Black Hills of Northeastern Wyoming.
It is not often that a young Aussie lass, that would be me, has the chance to have real cowboys at her beck and call and shoot images. Not even a temperature of minus 30 degrees and a howling wind, could dampen my excitement.
After shooting for a while, I asked Tommy to go into the forest and then weave back out through the trees towards me. His horse spooked, he crashed through some branches, he cussed, he cussed very loudly, the snow dropped on to his hat…..and that was the shot I was after!
This image has won a number of international awards, including a Silver Award in the 2012 International Loupe Awards.